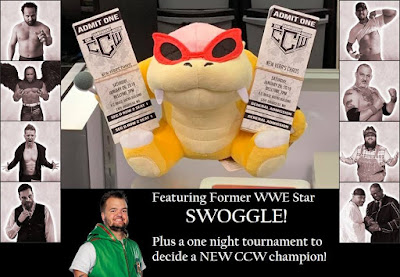 Cape Championship Wrestling returns to the Arena Building on January 26th, and they have teamed up with Gaming Grounds to make you an offer you shouldn't refuse!

Gaming Grounds in Cape Girardeau has a limited number of both second row and general admission tickets available, and we're going to offer anyone who purchases tickets through us 20% off any preowned game priced $39.99 and under!

Not only are you saving money at GG, you're supporting indy wrestling and getting a great show!

There will be a one night tournament to decide a new champion that Marko Stunt unfortunately had to vacate due to injury!

And the tag team titles will be on the line as the Wise Church takes on "Sexy" Sarge Oriley and former WWE star Swoggle!

We'll be running this deal until we sell out of tickets, but the numbers are limited so make sure you get in today, get your tickets to the best wrestling in the Midwest, and save some extra cash on a new game to play while you wait for CCW New Year’s Chaos!

And don't forget about our meet and greet with CCW superstar "Farmer" Billy Hills on the 26th before the show!